The U.S. President-elect will need to take instant decisive action in many critical areas, yet he dithers in selecting a dog for his children. This is not a good sign. Bush was mocked for terming himself a “decider,” but regardless of whether you despise the 43rd President or merely loathe him, it’s clear that he had a strong capacity for drawing conclusions. Sure, they were always disastrous conclusions, but that’s not the point. 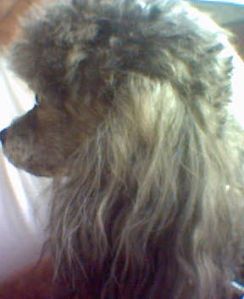 I have consulted with my usual expert on canine matters, and Betsy, my in-laws’ toy poodle, agrees that the only breed to pick from among the available non-allergenic choices would be a poodle. In the likely words of the President-elect’s brother-in-law, who coaches the Oregon State University Beavers basketball team: This one is your textbook slam-dunk.

Past being prologue, you want to know who else owned poodles? How about Elvis Presley (doting, if doped, master to “Stuff” the Poodle) and Winston Churchill (cigar-chomping companion of “Duchess” the Poodle.) These two worthies exemplify the kind of men who own such animals, and it may be said that if the American public comes to see the President-elect as combining the best elements of the Rock ‘n’ Roll King and the resolute wartime Prime Minister, Mr. Obama will be home-free. (Of course, it will have to be explained to a large section of America exactly who Mr. Churchill was, but that’s no biggie. Dude had an American mother and was America’s best friend, kind of like Barney Rubble, back when the Greatest Generation was fighting America’s enemies, the dreaded Hamburglars. Then, again, there’s the old uncertainty over which traits may emerge. You wouldn’t want a president with Elvis’s oratorical skills and Churchill’s raw sexuality. That path leads you straight back to W.)

For the President-elect, there are only benefits to welcoming a poodle into the White House, and there are no repercussions. His critics will be instantly disarmed, their accusations that he is a a socialist made immediately ridiculous. What kind of socialist would own so elegant a dog? Obviously, the Republicans meant to call him a Socialite — similar to the high-falutin‘ Mrs. Milburn Drysdale, the banker’s wife on television’s Beverly Hillbillies, who entered every scene carrying Claude the Poodle. As oil billionaire Jed Clampett observed, using his inimitable diction, “She does set a great store about that poodle, though.”

Concluding the case, a poodle-owning first family would draw a direct connection to the Age of Camelot.

The year was 1963, the Kennedeys occupied 1600 Pennsylvania Avenue, and Jacqueline’s toy poodle, Josephine, became the toast of the nation. I’m being a little coy, here. The Jackie I refer to was Jacqueline Susann, and her bestselling biography of her charming dog, Every Night, Josephine!, was a surprise bestseller which paved the way for her later series of dirty books, which captivated our parents and may well have precipitated the Generation Gap. But, look, you can’t blame Josephine for that.

Still, the President-elect insists on complicating his choice of dog, claiming he would prefer to adopt “a mutt — like me.” Sure, sure. Great line, but this shouldn’t become a bone of contention: Let’s agree that diversity is great, and so are hybrids. But it’s time to quit ditzing around over the easy decisions, and move along to face the challenging ones, i.e., General Motors being busted down to Sergeant, angry mobs chasing Citibank across the county line, Putin rearing his head, and all.

Send the girls down to the pet shop in the mall with your MasterCard and get this thing done already. Little girls love poodles. Name the dog “Pootin” and buy him a red-state collar from Target. House-train him to crap on both Pravda and the Washington Times, in rotation. A poodle sniffing around the periphery of the Rose Garden will defy expectations, keep Rush Limbaugh’s saliva bubble sputtering, make the Republican base seem even more base. That’s the power of the poodle. Yes, by Josephine; yes, you can.

One thought on “The dog-decider”

There's always more to be said about healthcare, at www.healthcarebabylon.biz